This episode of LMScast is a CaboPress review and how to run a quality mastermind event Chris Lema style with co-founders of LifterLMS, Chris Badgett and Thomas Levy. Chris and Thomas dive into how CaboPress compares to other WordPress conferences and what their experiences have been at CaboPress.

CaboPress is a business mastermind in Cabo San Lucas, Mexico organized by Chris Lema. It takes place at a five-star resort called the Fiesta Americana where all the food, drinks, and lodging is taken care of. Rather than a series of lectures, the conference consists of conversations in a swimming pool. 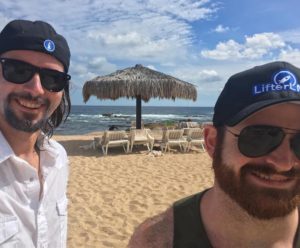 CaboPress does a great job of helping business owners transcend many of the issues they face on a daily basis and key in on some big picture solutions. Thomas and Chris live on opposite coasts on different sides of the United States. They make an effort to get together in person multiple times per year to strategize about the business outside of normal communication channels.

Conferences like CaboPress that have business leaders of all different levels of success are valuable for figuring out answers to questions you did not know you had. Chris works to extend the value of the relationships he builds at CaboPress by bringing guests from Cabo onto the LMScast podcast.

The power of getting one good idea can be of extremely high value to a company, and that is exactly what CaboPress delivers. Chris and Thomas have always come back with a whole suitcase of ideas, experiments, tests, and partnerships to explore from the event, but one key takeaway is often worth the price of admission.

If you have not been to a CaboPress, we encourage you to check it out. You can find it at CaboPress.com. It may be intimidating the first time you go, but you can spend time with people who have been before and would be happy to fill you in on the drill. Conferences are more valuable when you have a business partner to reflect and strategize with, so if you have a business partner be sure to invite them as well.

You can head over to LifterLMS.com to find out more about how you can use LifterLMS to build your own online courses and membership sites. Subscribe to our newsletter for updates, developments, and future episodes of LMScast. If you like this episode of LMScast, you can browse more episodes here. Thank you for joining us!