Don’t be a marketing scumbag! Conversational copywriting for course creators with Nick Usborne in this episode of LMScast with Chris Badgett of LifterLMS. Chris and Nick dive into the fundamentals of what copywriting is and how you can produce great copy for any product or service you sell.

On a basic level copywriting is writing words that in some way contribute to making a sale. Copywriting can be print ads, blog posts, a website homepage, a sales email, or anything used to shift people’s perception. 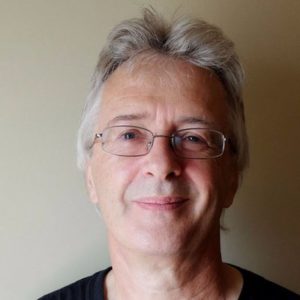 Nick has 38 years of experience as a copywriter, and he has worked with several big corporate clients. In 1979 Nick got his first job in copywriting, and at that time he was working with just straight print advertising. He moved into direct response copywriting and has done almost all types of copywriting since then.

Many people don’t think of a business name and tagline as copywriting, but those things are just as much copywriting as a series of blog posts. Having a business name that catches people’s attention and makes you memorable is important for differentiation. Nick and Chris talk about a few examples of awesome company names.

Nick shares a story about a coffee shop in Dublin, Ireland that has the name “Meet Me In The Morning” written on the wall. Chris had a bar in his college town called “He’s Not Here.” These types of dynamic titles are very impressionable and paint a vivid picture in your customers’ heads.

A great strategy to create copy that sells is to try to get into the minds of your customers and speak to the issues your product solves from the buyer’s perspective. Instead of thinking like a copywriter, think like a marketer. If you’re selling fitness equipment, you can go look at Amazon reviews on the product to see how customers talk about it.

With great power comes great responsibility. When you understand the power behind conversational copywriting, you can sell products to anyone who is closeable. Nick and Chris talk about holding your integrity higher than the bottom line and not pressuring your customers or selling products to people who don’t really need them.