WordCamp is usually $40 for a two-day event where the WordPress community comes together all across the world to learn about new developments in the space and to socialize. The admission pays for the food, and there are sponsors that cover the price of the venue. There are typically three 45-minute presentations happening at the same time during the day, so you can learn about topics that interest you. 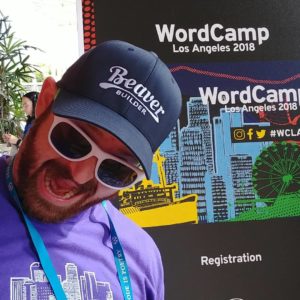 Thomas was the lead organizer for WordCamp LA 2018. He has been involved with WordCamp LA since 2015 when he volunteered at his first WordCamp ever. Thomas shares insights he has gained from his experiences with WordCamps and engagement with the WordPress community in person.

With most tech conferences Thomas has attended before 2015, he would find a seat in the back of the room close to a power outlet and work on his computer, only halfway paying attention to what was going on. Once Thomas volunteered at his first WordCamp in 2015, he became much more engaged with the community.

The core idea of WordPress is accessibility. WordPress is open source software that anyone can use, and anyone can build on top of it. Contributing is the core philosophy of the WP community. That is why Thomas tries to speak or volunteer at every WordCamp he attends.

If you’re on the fence about WordCamps and other local Meetups, just try them out. You can find talks from previous WordCamps at WordPress.tv.

The WordPress community is comprised of much more than just developers. At WordCamps you will find bloggers, artists, marketing experts, and everyone in between. We encourage you to find where and when your local WordCamp gatherings are, and get involved with the awesome community of WordPress users.

Chris is one of the lead organizers for WordCamp Portland, Maine, and Thomas will also be there. They have some LifterLMS swag stickers you can pick up at our booth there and the LifterLMS space helmet and rocket cutout you can take your picture with as well.

Go to LifterLMS.com to find out more about how you can use LifterLMS to build your own online courses and membership sites. If you like this episode of LMScast, you can browse more episodes here. Be sure to subscribe to our newsletter for updates, developments, and future episodes of LMScast. Thank you for joining us!